Guitarist and songwriter Peter Green died in London a week ago, and I have been going back through my Fleetwood Mac records, and Peter Green CDs since then. I have tried to find an iconic photo, and have chosen this one, probably from 1969: 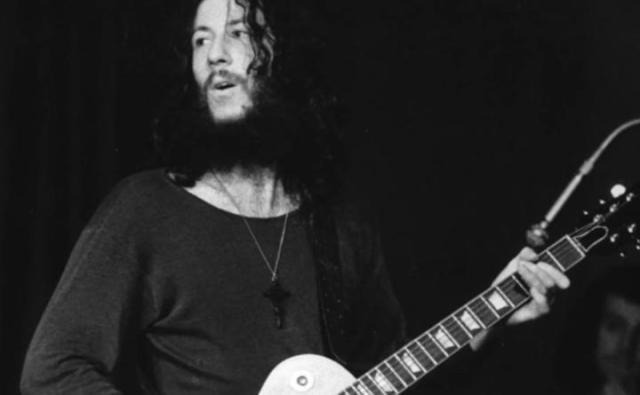 Peter Green’s Fleetwood Mac were huge in 1969, as he released his spellbinding singles from Albatross to the scarifying Green Manalishi (with the Two-pronged Crown). Green had actually moved on from being something of a blues purist, during the blues boom specific to British music at the time, but, like some of the old style black musicians of an earlier era, was obviously still haunted by something, which he could not quite express. This is despite the rather obvious lyrical content of songs like Man of the World.

Anyway, 1969 was the big year in rock music internationally, and was of course when Woodstock and other things made certain figures into cultural icons. It was also the year before Jimi Hendrix and Janis Joplin died, and the cult figure was established as a youthful sacrifice of sorts. But in England the end of the 1960s became the moment of the genius as drug casualty, something that may have been true of Syd Barrett, and has been assumed to be true of Peter Green. Most of the reports and obituaries in the press just have to mention Green taking LSD and it all falling apart. Even some sympathetic writers and fans accept this version of events, even though it involves some exaggeration and distortion. One would expect the media to do this, even music magazines such as Mojo had one of its first issues include articles on both Barrett and Green, and the madness.

These articles were in 1994, but by 1997 Peter Green was back playing live, and though the same old cliches were still being written, the reviews had to note the enthusiasm of the crowd for their lost hero. And the fact that he could still play guitar in style, only somewhat diminished by age and all the turmoil of the interceding years. I too was pleased to hear of his comeback, and bought some of the new releases from Peter Green’s Splinter Group. Green was assisted by his friend Nigel Watson on guitar, and they managed to recruit one of Britain’s best rhythm sections in the form of Neil Murray (bass) and Cozy Powell (drums). Powell had played with some of the other English axe heroes, such as Jeff Beck and Ritchie Blackmore, and didn’t last too long. On the night that the Splinter Group was recording their Soho Session live, Cozy Powell died in a car crash near his home aged 50. It seems that some kind of jinx still haunted this music.

However, Peter Green’s new group mostly played the American blues music that had so entranced young white men with six string guitars in the 1960s. This involved both the acoustic country blues of the 1930s, as exemplified by Robert Johnson, and the urban electric blues from Chicago, especially the so-called West side version, mainly created by Otis Rush. Peter Green’s Splinter Group did useful versions of Robert Johnson songs, but it was the urban blues of Otis Rush that remained the core of the set, including classics like It Takes Time and Homework. John Mayall’s Bluesbreakers had played the West side songs in the mid 1960s, with the young Eric Clapton on guitar, as well as Freddie King instrumentals; and Green of course replaced Clapton in the Bluesbreakers. Green’s Fleetwood Mac had even gone to Chess Records’ studio in Chicago, in early 1969, and recorded with some of the side musicians there, including a great version of Rush’s Homework. Fast forward to 1997 and Green could still play the song in that way.

There was always something odd about those young English white boys taking the old blues music back to America, with an added dose of enthusiasm and technique. Green and company could play the music, but did not sound like black blues men in timbre or phrasing. Yet it was Green most of all, who tried to understand more about it than say groups like Led Zeppelin, who used songs and blues phrases without crediting the original authors. But as players the Fleetwood Mac guitarists, Green, Jeremy Spencer, and Danny Kirwan, did contribute to the remaining blues cannon, such as it was in the late 1960s when the music was actually in decline in the black community. Green and company played on new LPs by Eddie Boyd, and the pianist Otis Spann, on an album called The Biggest Thing Since Collossus. These sessions were set up by the English producer Mike Vernon, whose Blue Horizon label gave some new opportunities to some of the older black players. Indeed, Otis Spann actually died not long after his LP was released.

It’s true that my Splinter Group CDs had been gathering dust for some time, though I listen to early Fleetwood Mac quite regularly. But listening to this 1997 incarnation is a pleasure, and the music still swings. Though his voice did deteriorate, Green could now sing the blues, and sound affected. It was actually his famous Fleetwood Mac songs that didn’t sound quite right. In truth, the young white guys put the rock into blues music, when it was only an element of the Chicago blues, and was exemplified by Otis Rush, one of the more unlucky of the black performers in terms of (not) being recorded in his prime. If one wants to hear rock meeting the blues full on, then there are the recordings of Fleetwood Mac at the Boston Tea Party in early 1970. Green and Danny Kirwan’s guitars duel on Black Magic Woman, and harmonise in other songs, while Jeremy Spencer really plays slide guitar on Can’t Hold Out and a swinging version of Madison Blues. But it is the ferocity of Green’s playing in the Green Manalishi which is astounding, certainly that of a man possessed, if not in anguish. If you like heavy blues playing that was it, there and then, but not a space which most players should want to get into, or could again. So Peter Green joins Danny Kirwan, lost souls but never to be forgotten.

This entry was posted in Uncategorized. Bookmark the permalink.