After one of the more bizarre elections in world history, attention remains fixed on the American state of Georgia. It is the only state that is in full recount mode, because, or despite of, there being a Republican Party member as the Governor. There hasn’t been this much attention on Georgia since 1976, when the then Governor, a Democrat, was about to become the POTUS. 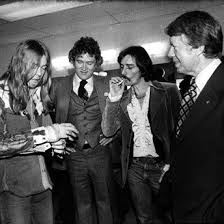 The Governor, Jimmy Carter, is on the right of the photo. Next to him is Dickie Betts, guitarist in the Allman Brothers Band. To his right is Phil Walden, the founder of Capricorn Records, the label that introduced so-called ‘Southern Rock’. And next to him is Gregg Allman, of the Allman Brothers Band. Presumably, they were not discussing electoral results. Jimmy Carter went on to be a one term President; Dickie Betts came and went from the Allman Brothers band over the years; Phil Walden’s business empire collapsed in the late 1970s, taking out Capricorn Records; and Gregg got divorced (from Cher) not long after this was taken.

But Southern Rock lived on, mostly through the work of a band called Lynyrd Skynyrd. That band had not jumped on the Capricorn Records bandwagon. Instead, they were discovered by a Yankee Slicker, in the form Al Kooper, who managed to sign them to a big label, MCA Records. This put them in the big league, and thus had much more international exposure, allowing them to appear with big British bands like The Who. Skynyrd had much more Southern attitude than the Allmans: as they put it in the song ‘Sweet Home Alabama’, they loved the Republican Governor, and didn’t care about Watergate. Their leader, Ronnie van Sant, had the southern schtick, and the group played in front of the Confederate flag. But he was also no fool, and he soon parted company with the Yankee Slicker, once they had achieved a commercial breakthrough. Ronnie van Sant died in a plane crash in 1977, but the legend lives on, and the cash still flows every time ‘Sweet Home Alabama’ plays on classic rock radio around the world.

This was something of an allegory. You could call Donald Trump a Yankee Slicker, and a snake oil salesmen. Many in the news media like to do the old vox pops, and find a Trump supporter who believes every word he says. Maybe some are that gullible. But others are possibly just playing along, having launched their cultural posture back into prominence. Just like rock n’ roll was always Southern music, so are all real Americans.

This entry was posted in Uncategorized. Bookmark the permalink.