Stichting or Stak: How to create a Dutch Sandwich with a New Zealand Trust 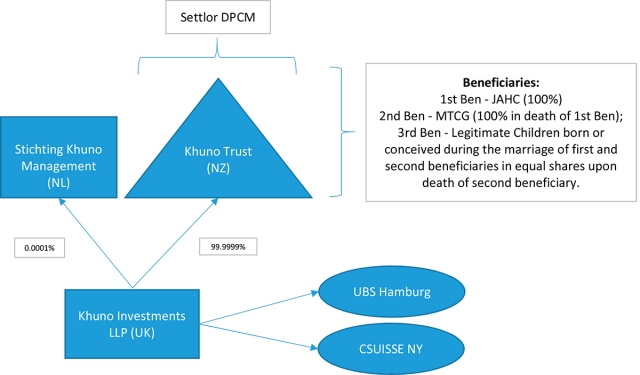 This diagram is borrowed from http://www.proceso.com.mx/435567/hinojosa-cantu-el-donador-de-la-casa-blanca-esconde-100-mdd-en-negocios-fantasmas.

What it shows is one of three structures created by Mossack Fonseca and other firms, including Bentleys of Auckland, for Juan Armado Hinojosa Cantu of Mexico. In one of the first articles published that utilised the Panama Papers, by Tim Johnson of the American organisation known as McClatchyDC.com, the story is “A well-connected Mexican tycoon stashes a fortune overseas”. Hinojosa was closely linked to politicians, and already had a number of offshore companies in the Caribbean, including the British Virgin Islands. So why did he want to create a more complex structure that ‘stretched’ all the way to New Zealand? Well, he was too close to Mexican politicians and was under close scrutiny.

Rather than go through all the detail, which has been covered in Spanish language media, I will concentrate on the Dutch and New Zealand link. Briefly, there is documentation which shows the request made via the law firm D’Orleans, Bourbon & Associates based in Mexico. The letter to Olga Santini refers to the transfer of 4 BVI companies and 2 based in Nevis, into a structure of 3 New Zealand trusts, which are to be beneficiaries of a Dutch ‘Stak’ foundation, and with a dispersal of funds to 4 international banks, before the original 6 companies are dissolved. The 3 trusts are named after ancient Incas: Khuno, Huanca, and Huiracocha. So, as the Panama Papers database indicates, there is first a Khuno Investments LLP with a Dutch address; then the limited partnership is made up of the Stichting Khuno Management and the New Zealand Trust, set up by Orion Trust (NZ) Ltd in Auckland (see my previous post). In the database the beneficiary is named as Juan Armando Hinojosa, but in actual fact the transfer is executed for, or by, his mother. She appears to put money in trust for her son, but it was actually the other way around. 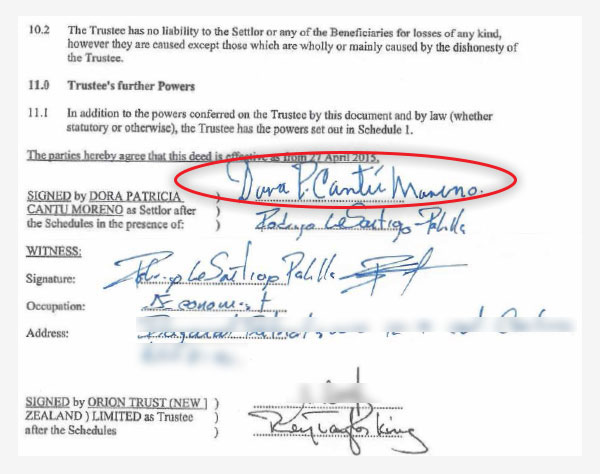 This screenshot from the documentation was found at:  http://www.proceso.com.mx/435567/hinojosa-cantu-el-donador-de-la-casa-blanca-esconde-100-mdd-en-negocios-fantasmas

What the document shows is that Hinojosa’s mother, Dora Patricia Cantu Moreno, signs as the settlor of one of the 3 trusts, and it is witnessed in Mexico; while the trustee for new New Zealand trust is from the Orion Trust, and the signature is that of a nominee director, Rey Franklin Taylor King, whose residence is listed as being in Panama. One of the interesting things about this is that there is perhaps a different way to do this type of transaction, with the Dutch foundation owning the New Zealand trust company. It is also worth noting that there is a difference in Dutch law between a ‘stichting’ foundation, and a ‘stak’ foundation, which was what the original request referred to. The purpose of the stak foundation is to separate ownership, by holding shares for legal purposes, as explained by Dr Hans Dijhof of Arcanum Management & Company Services BV:

“…the shares will be transferred into the legal ownership of the Stak foundation to administer these shares for the benefit of the transferror and against the simultaneous issuance of depository receipts (also called certificates) by the Stak foundation. This is the obligatory agreement [and] has to be followed under Dutch law by a transfer of the legal ownership of the shares…[as laid down in a deed]”

So the foundation becomes the owner of the shares, and has the voting rights, but the holders of the depository receipts gets the dividends. Although this seems complex, that is, of course, the intention, since the objective is preventing ownership disclosure.

It also helps explain the role of some stichting’ and ‘stak’ foundations that appear on the New Zealand company register, and set up by the Corpag Group based in the Caribbean, through their Corpag Services (New Zealand) Trust Ltd. Corpag has a number of New Zealand companies with the key directors being James and Catherine Walfenzao, who are based in Monaco. They have had a few associates in companies set up by Asiaciti, which is still listed as their New Zealand base, even though the companies are administered by the Nexus Trust group in Auckland. However, I will just look at 3 companies set up by Amicorp, but administered by Nexus, with a director Menno Jordaan of Corpag, based in Curacao (Netherlands Antilles).  The companies include Palatino Management Ltd, that was owned by Corpag Services, then transferred to the Stichting Administratiekantoor International Producer in Curacao; and Coronado Management Ltd, which Corpag transferred to the Stichting Administratiekantoor Coronado, in Curacao, in May 2016. But the really interesting one is Tannen Ltd, that was set up in 2015, and has been transferred a couple of times between Stichting Administratiekantoor Cantona and Stak Murano, based in Amsterdam. The original document for the shareholding suggests that the stichting was located in Amersterdam, but then it appears to be in Curacao – is this a dutch sandwich?